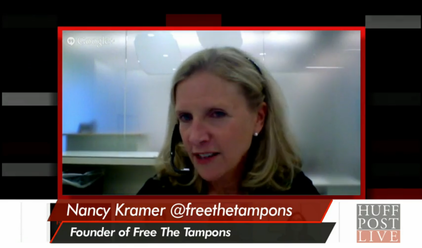 Items like contact lenses, orthotics and incontinence products are exempt from the goods and services tax (GST) in Canada, because the government has deemed them essential for daily living. So why aren't tampons and pads exempt too?

That’s the question one Canadian group has been wondering for a while.

"Menstruation products are not things we choose to use," Jill Piebiak, who is part of the “No Tax On Tampons” campaign, told CTV News.

The group has started a Change.org petition calling on the federal government to make menstrual products tax-exempt, arguing that current laws profit off women’s bodies.

Pads and tampons don't just help preserve womens' dignity, they're essential. Homeless women often have irregular access to toilets and menstrual products, Vice U.K. reports, a situation that can potentially put them at risk for conditions like toxic shock syndrome.

A few private members' bills have targeted the policy over the years. Former Winnipeg NDP MP Judy Wasylycia-Leis introduced a bill in 2004 arguing that the products should be tax-exempt, and Ontario NDP MP Irene Mathyssen tried as well in 2011 and 2013.

Canada isn't the only country that slaps a tax on pads and tampons. A similar Change.org petition has sprung up in the U.K. against that government's 5 per cent tax on menstrual products. Australians are also protesting the tax.

The U.K. organizers expressed frustration that while menstrual products are taxed, "exotic meats" are not.

"While we can live without consuming the flesh of unusual animals, we cannot live without the public participation of those who menstruate, which is dependent upon the accessibility of sanitary products," the petition reads.

A U.S. initiative is going a step further with Free The Tampons campaigns for freely available products in restrooms across the country. Organizer Nancy Kramer, who works in digital marketing, made her case in a TEDxColumbus talk back in 2013.

We have to wonder, who in Canada decided that incontinence products would be tax-exempt, but not pads and tampons?
​
Yahoo News tried to get a comment about the petition from three federal departments, but had no luck. Office representatives from the ministers of finance, revenue and status of women all refused to comment.