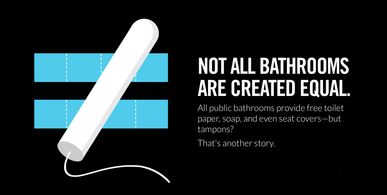 Oh, I see, a lot of you already are – like over at Huffington Post and at Jezebel – ever since digital marketing pioneer Nancy Kramer gave a TedXColumbus talk Monday to launch her Free the Tampons campaign for all public women’s restrooms to offer free sanitary products. (Watch the talk here.)

Kramer is not the first to make the call or use the phrase, but she’s certainly one of the most famous. The founder of Columbus-based Resource LLC, the nation’s largest independent woman-owned marketing agency, has transformed online marketing. She’s leveraging that know-how behind this campaign.

So why are free tampons her cause, one she’s funding mostly out of pocket?

Kramer, 57, grew up “not talking about it,” like most of us. Then in 1982, she saw free supplies in the restrooms at the headquarters of Apple Computer Inc., her first client. The image stuck during her almost daily air travel while establishing her company, finding ways to hide supplies in her socks to get to the restroom discreetly.

This year, she finally decided to act.

“When my daughters hit middle-school age, the thought they could be embarrassed or humiliated because they didn’t have supplies ... I thought that was unacceptable,” she said.

Fully 86 percent of women aged 18-54 – that works out to 100 million U.S. women – have been caught unprepared in public, according to an online Harris Interactive poll that Kramer personally financed. Most of them end up having to “MacGyver” a solution from toilet paper – Kramer credits the Resource creative team with that zinger, which caught the fancy of blogging celebrity Heather Armstrong, who sent it to her 1.5 million Twitter followers. (There was no remuneration.)
​
Resource spends $4.57 a year on each female worker (just under 200 women) to stock its restrooms with pads and tampons, she said.