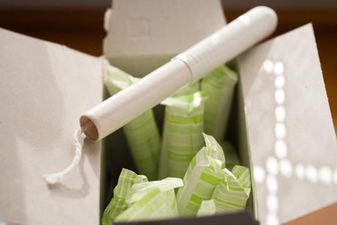 Photo: Alamy/Cristina Fumi
Periods are a fact of female life.

But for many women in the U.S., sanitary materials are hard to attain because they’re just too expensive. That’s why an increasing number of advocates and legislators are suggesting that tampons should be free.

“I was the director of an after-school program in Queens, New York, and I came to learn that young girls would skip out and go home because they were on their periods,” Ferreras tells Yahoo Health. “Sometimes it was due to the discomfort, but other times they’d run out of pads and were too embarrassed to ask a teacher or nurse. They preferred to lose learning time in order to save face.”  But according to Ferreras, the problems for teen girls don’t stop there.

Improper hygiene during your menstruation can lead to vaginal infections and toxic shock syndrome, says Ferreras. “It’s important to de-stigmatize feminine hygiene products, which help us carry out our daily functions without interruption and avoid those risks. It’s also a matter of giving young girls dignity throughout the process — they shouldn’t feel ashamed of being women.”
​“Men’s restrooms have everything men need, women’s do not,” adds Nancy Kramer, the founder of the #FreeTheTampons movement to make free feminine hygiene products the norm in public bathrooms. “Tampons and pads should be treated like toilet paper. It’s the same.” Kramer, who is based in Columbus, Ohio, is the founder and chair of digital agency Resource Ammirati. She launched her agency, then called Resource, with Apple as its first client — and it was at Apple’s offices that she first started thinking about tampons.

“The first time I saw tampons and pads made freely available in a public restroom was at Apple’s corporate headquarters in Cupertino, California. It was January 1982.  Ever since that moment, I wondered why these items weren’t readily available in all public restrooms,” Kramer tells Yahoo Health. “Periods are [a] normal bodily function and the fact that women’s restrooms are not equipped with the items we need to tend to our normal bodily function is an equality issue.”

According to #FreeTheTampons, a startling 86 percent of U.S. women age 18 to 54 report that they’ve started their period unexpectedly in public without the supplies they need.

When Kramer’s daughters became teenagers in the early 2000s, the issue became newly personal to her. She eventually convinced the principal of their school to make tampons and pads free for its students in restrooms.

“The thought that my daughters and their friends may get ‘caught’ without these items when they needed them was unacceptable to me as their mother,” Kramer says. “Furthermore, the fact that many schools send girls to the nurse to retrieve these items — as if the young girl is sick — is beyond offensive.”

Jennifer Weiss-Wolf is another leading voice in the #FreeTheTampons movement, even writing a recent op-ed for The New York Daily News on why tampons should be tax-free. “While I am a lifelong reproductive rights activist, I have to admit I had never even thought of this issue until two local teens, Emma and Quinn Joy of South Orange, New Jersey, started a donation project called ‘Girls Helping Girls. Period.’,” Weiss-Wolf tells Yahoo Health. “They led a high-impact, high-energy local campaign. I became so intrigued — and incensed — about the current state of affairs for girls and women who can’t afford these essential products.”
​
"Feminine hygiene products are not a luxury — they are a necessity, "Weiss-Wolf adds. “There is simply no way for a person who menstruates to function in society without these products. If girls are missing school or class — or are unable to focus in class — because they are bleeding through their clothing, or mortified of that possibility, a tampon or pad can keep them doing what they are supposed to be doing: learning!”